The 80th ILA Conference was opened in Lisbon on 19 June. The opening featured a video message by the UN Secretary-General António Guterres. The closing ceremony on 2 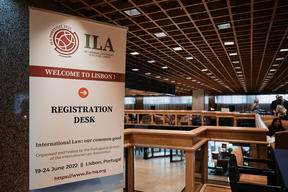 The FNI was actively represented at the 80th Biennial Conference of the International Law Association (ILA), held in Lisbon, Portugal, 19–24 June 2022. The ILA, a non-governmental scholarly association holding consultative status with a number of United Nations specialized agencies, has a membership of about 4600 international lawyers – including scholars, judges and arbitrators, legal counsels, diplomats and decision-makers – spread among 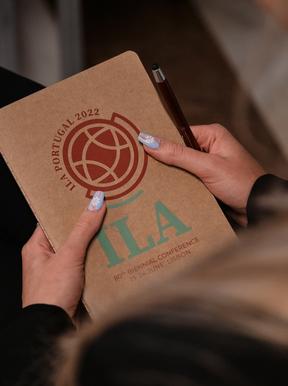 63 regional and national branches around the globe. An expert organization with a nearly 150-year-long tradition since its founding in Brussels in 1873, the ILA has premises in London, but its biennial general conferences are hosted by ILA branches in various countries. This year’s one-week international conference, hosted by the Portuguese ILA Branch in Lisbon, was the first in-person biennial conference of the ILA since the 78th Conference in Sydney, Australia, was held four years ago.

The ILA promotes the study, clarification and development of international law as its main objectives. Its work is organized through international committees and study groups convened to examine topical international legal issues. Among the current 20 international committees, the Committee on International Law and Sea Level Rise brings together 45 prominent legal experts from 23 ILA branches, and is chaired by FNI Research Professor Davor Vidas, of the Norwegian ILA branch. At the Lisbon Conference, the Committee presented its interim report, following up on the reports presented at the ILA Biennial Conferences held in Johannesburg in 2016 and Sydney in 2018.

‘This year’s report, which is the third report of the Committee on International Law and Sea Level Rise since its establishment in 2012, addresses the implications of sea-level rise for the law-of-the-sea issues of maritime limits and boundaries, as well as questions of statehood under international law and the rights of affected populations.’

At the Lisbon Conference, he presented this report as the Chair of the Committee, together with and on behalf of Co-Rapporteurs, Professors Elisa Fornale (Swiss ILA branch) and David Freestone (UK branch).

‘The analyses and proposals of the Committee in this unprecedented issue-area of legal implications in the face of sea-level rise are informed by the overall objectives of international law as regards facilitating legal certainty and stability. This approach to the complex set of issues prompted by recent scientific predictions of sea-level rise has resonated with many States, who have made reference to the findings and recommendations made by this ILA Committee in debates at the Sixth (Legal) Committee of the UN General Assembly in recent years. Also, the International Law Commission of the UN, which has since 2019 included the topic of sea-level rise in relation to international law in its active work programme, has made references to the reports of our Committee and the ILA resolutions on sea-level rise which were adopted in Sydney in 2018. I trust that this new report presented in Lisbon a few days ago will further contribute to the ongoing international debate on how to best approach the legal issues prompted by sea-level rise.’

At the Lisbon ILA Conference, the FNI also co-organized, in cooperation with the Centre for International Law (CIL) of the