Julia S. P. Loe defended her thesis ‘The Russian Gas Sector in a Changing World: Gazprom´s Response to Upstream and Market Changes’ at the University of Oslo (UiO) on 19 December 2018.  She first presented a trial lecture on the role of theory in political science research designs, before moving on to the actual defence of her dissertation.

In the last decade, the Russian state-controlled energy company Gazprom has had to face up to new commercial realities: institutional changes in its core market in the EU, the need to find new production areas to keep up supply and, not least, growing domestic competition from actors lobbying for liberalization.

Gazprom has adapted to these changing conditions only reluctantly, and arguably less so than what would be in its own, commercial interest. How can Gazprom´s behaviour best be understood? Can material factors explain the company’s choices, or should cultural and normative ideas also be factored into the equation? These are key questions that Loe pursues in her dissertation.

Loe explores three different cases which reflect Gazprom’s approach towards three distinct challenges: the introduction of hub-trading in Europe, the development of the Shtokman field, and the question of liberalization of the Russian domestic market. Loe finds that Gazprom representatives often subscribe to specific ideas regarding the company’s role in the game, and that at least some aspects of its behaviour can be explained by the influence of ideas, not purely utility-maximizing materialism. She further argues that these ideas are in line with Gazprom´s corporate-political identity, and indeed with Russia´s national identity.

Materialist accounts of Russian gas sector developments can explain much of Gazprom´s behaviour, but they are not sufficient. By introducing an ideational perspective and connecting it to the Russian institutional-cultural context, I present a more complex picture of Gazprom´s behaviour’, Loe explains.

Related reading: “But it is our duty!” Exploring Gazprom’s reluctance to Russian gas sector reform

During her defence of the dissertation, which took place in the historical banquet hall (Gamle festsal) Loe was commended by the adjudicating committee for 'a truly significant contribution to the literature in her field', and for analysing ‘one of the most interesting topics in energy politics’. Further, Loe was praised for having constructed ‘a unique database’ for the matter under study; Loe conducted no less than 66 interviews with high-level insiders in Russia’s natural gas industry and politics.

Loe emphasized that she had not set out to defend or ‘side with’ Gazprom in her study. Rather, her aim was to contribute to better understanding of this large and important, but often misunderstood, energy company. Russia and Norway account for around fifty per cent of the natural gas imported by the EU. From a competitive perspective, it is important for Norway to understand its neighbour and how Gazprom reasons.

The findings in my thesis may also contribute to a better understanding of the differences between Russian and Western thinking’, notes Loe.

Loe’s PhD thesis has been mentored by Professor Dag Harald Claes and postdoctoral fellow Kacper Szulecki, both of UiO. 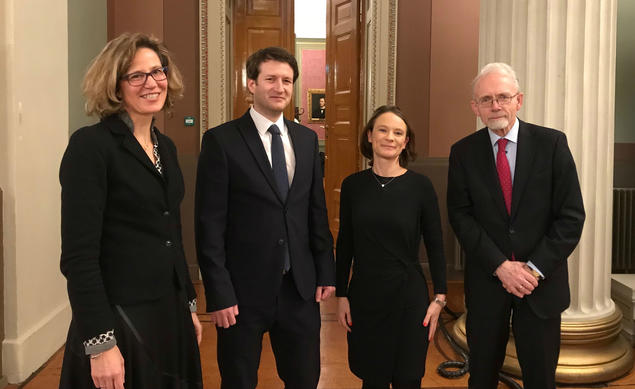