With a session on China in the Arctic, FNI filled the conference room with an attentive audicence.

With our Arctic Circle breakout session on China in the Arctic in the morning of 14th October, we saw a full room of participants. The Polar Silk Road was among the topics related to China in the Arctic upon which the panelists spoke. Plans for a Polar Silk Route between Asia and Europe was announced in 2017, as part of its infrastructure project, the Belt and Road Initiative (BRI). China sees itself as a near-Arctic state and obtained observer status in the Arctic Council ever since 2013. In 2018, China presented its Arctic policy document (or White Paper) which incorporates the Polar Silk Road. The Polar Silk Road has developed slowly, and largely consists of investments in resource extraction projects in the Russian Arctic on LNG (liquefied gas) in Yamal, where China has ownership interests, as well as tankers that transport LNG from Yamal. There has also been moderate development in shipping through the Arctic. Moreover, other topics that were discussed by the panelists were Chinese involvement in the Arctic minerals sector, the changing geopolitical environment in the Arctic and how to find a way forward to promote cooperation in the Arctic. 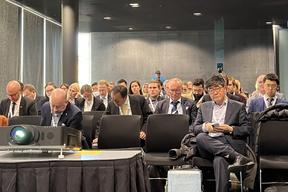