How is it that some states manage to settle their maritime border disputes, while others do not? FNI researcher Andreas Østhagen breaks new ground with his recent PhD thesis.

Østhagen defended his Lines at Sea: Why do States Resolve their Maritime Boundary Disputes? on 9 September, at the University of British Columbia (UBC), Vancouver, Canada. He had been working on his thesis since 2015, and reached the finishing line one year ahead of schedule.

This is an impressive achievement from a young scholar who has been working and publishing extensively on other issues in parallel with his PhD work. Østhagen is really a whirlwind among researchers. He is highly productive, and a valued colleague here at FNI’, says FNI’s acting director, Lars H. Gulbrandsen.

In this doctoral thesis, Andreas Østhagen asks a deceptively simple question: Why do some states resolve their maritime conflicts, whereas others do not? Intuitively, one might assume that all states would wish to settle their border disputes, ‘clearing the air’, so to speak. But, as Østhagen demonstrates in considerable detail, this is not always the case. More than half of all maritime boundaries have remained unresolved, and in fact, there are numerous reasons why many states seem content to keep things that way: the expenses involved, precedent-setting, political prioritization, public opinion, legal complexity, geopolitical tensions and security dilemmas — to mention a few. There are also historical trends and colonial legacies involved, shaping how different actors approach the issue, as Østhagen shows. 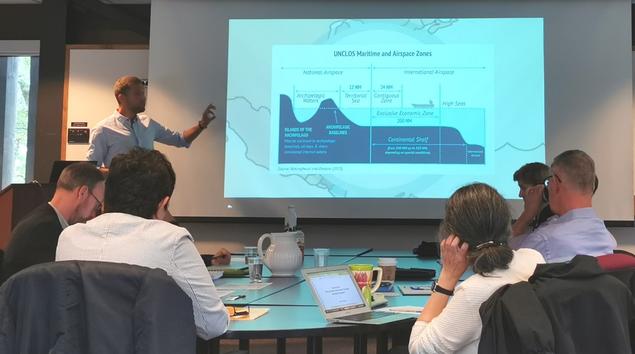 What are these key conditions? Is it the existence of valuable natural resources, like oil and gas? Is it the prospect of ‘cashing in’ on such resources that drive states to resolve ownership issues and unclear borders? In fact, Østhagen finds, the existence of petro-resources is not  the primary driver for maritime dispute settlement. In several cases, oil and gas resources have been identified, but the states in question have still refrained from resolving their border issues. For instance, oil and gas were known to be present under the seabed between Norway and Russia long before their maritime border was finally resolved in 2010. Instead, we must see a how various factors interact at a given moment in time.

Østhagen finds that what plays a key role is the legal context surrounding the dispute – i.e. how states have handled other disputes previously, for instance. Moreover, fisheries act to propel deal-making when coupled with security concerns. In cases where large fisheries are involved, states will want to resolve their differences and agree on clear-cut boundaries – even if this sometimes means acting counter to domestic interests. While some actors may benefit from operating in ‘grey areas’, the state will prefer a clear and defined jurisdiction.

Commended by the jury

Østhagen defended his 325-pp. thesis before an examining committee consisting of no less than seven professors, from three different disciplines; political science, international law and political geography. They commended Østhagen for taking an interdisciplinary approach, applying both legal and political perspectives to the issue — and not least for his thorough and impressively extensive empirical groundwork.

Østhagen says he would like to build further on his thesis work, perhaps moving on to examine other relevant case countries, such as Morocco or Indonesia.

The next step is to take these results and prove that they can withstand scrutiny in cases that are markedly different, and where countries have settled fewer of their maritime boundaries. Examining other contexts might also tease out additional factors that were not identified across these four countries, in turn allowing a comprehensive understanding of why states actually manage to agree on a boundary at sea,” says Østhagen.

At FNI, Østhagen has looked at other aspects of ocean politics, namely how states and their management regimes for shared fish stocks respond to climatic changes (see for instance the Stockshift project), as well as how Norway and Russia interact and cooperate in the Barents Sea and in the maritime zones around Svalbard.

Settling Maritime Boundaries: Why Some Countries Find It Easy, and Others Do Not

Fish, not oil, at the heart of the South China Sea conflict